What are the differences between cut and rolled threads?

Are the threads cut or rolled? Earnest Machine explains the differences between the two production types.

When a thread is rolled, it means the thread was formed by cold forming the steel by pressing the part between either two flat plates or round dies that have the thread pitch machined onto their face. As the part “rolls” through the dies, the pressure applied by the plates creates the thread without cutting or removing material.

A cut thread (also called a machined thread) is made by machining away the material in order to create the thread form. Cut threads, as the name implies, are made by cutting away material. 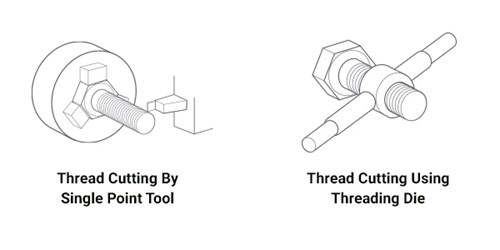 Customers who ask this question are typically looking for a product that they can offer their customer that has the highest perceived quality. The reason rolled threads are perceived to be better than a cut thread is:

When dealing with non-heat-treated bolts (grade 2, grade A, low carbon steel, etc.) a rolled threaded part will have a higher strength than a bolt with cut threads in the area where the threads were formed. 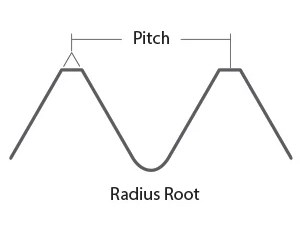 The form at the bottom (root) of the thread plays an important role in the fatigue resistance of the thread. A radiused (rounded) thread root does improve the thread’s fatigue resistance. Cut threads are often perceived to create a sharp point at the thread root. A sharp point at the root does make a thread more susceptible to fatigue failures as compared to a thread with a round root. Threads can be cut using a cutting tool that has a radiused point to create a rounded root thread. A heat-treated bolt with a cut thread that has a rounded root radius will have a comparable fatigue strength as compared to a heat-treated bolt with a rolled thread.

The best thread form (called the aircraft quality thread) is to roll the threads after heat treatment with a large root radius, called a UNJ thread form. A grade 5 or 8 strength level bolt that has had its threads rolled after heat treatment will provide the highest resistance to fatigue failures.  If the parts have been heat-treated after the thread forming operation, the way the threads were manufactured (cut or rolled) does not provide a significant increase in the fatigue resistance.

This article is an edited version of an Earnest Machine blog entitled ‘What are the differences between cut & rolled threads?’

The nuts and bolts of confident bonding

At Zygology we are specialists in self-clinch and press technology.