Technical and applications support from Henkel has helped jewellery manufacturer Bailey of Sheffield to overcome a number of bonding challenges in the manufacture of its products.

“From the moment I contacted Henkel head office, it clearly didn’t matter that we were a relatively small company and that our products would only require a tiny amount of Loctite,” says company founder Scott Bailey. “I cannot speak highly enough of Henkel’s approach to working with a young but ambitious business like ours. Henkel immediately wanted to understand our processes and challenges. There was 100% commitment to solving the issues.”

The core product at Bailey of Sheffield is its bracelet, manufactured from 316L stainless steel. The bracelets come in a range of PVD colours and finishes, and can be fully personalised. As with any engineered product, there are challenges to overcome. For Bailey of Sheffield, one of these involved the bonding of precision-machined stainless steel clasp components to both ends of the bracelet cable. “Within our workshop we were seeing a tiny number of bracelets failing our quality control procedure regarding the bonding of clasps to cable ends using an adhesive manufactured by a Henkel competitor,” explains Mr Bailey.

Dissatisfied with the incumbent supplier’s response to solve the issue, the company turned to Henkel, which recommended Loctite 9466 toughened epoxy adhesive to provide a high-strength, durable bond. This neutral-coloured product would also offer good resistance to soaps and shampoos, and facilitate easy application and room temperature curing.

“I tested some of the bonded parts at The University of Sheffield, realising immediately that it was the right product,” states Bailey. “We went live with Loctite 9466 within just a few months of my first phone call. Thousands of bracelets have since been assembled using this product.”

In actual fact, Bailey of Sheffield was already a Loctite user. The company manufactures precision-machined stoppers that secure beads in position on its bracelets if that is the customer preference (some like bracelets with free-running beads). Two M2 grub screws (3mm long) hold the stoppers on the bracelet.

“We tried adjusting the machined thread on our stopper, as well as different grub screws. However, it was my retired father, an engineer by trade, who suggested that I should be using a threadlocker. I watched a YouTube video on Loctite 243 and haven’t looked back since.”

Following its success with the bracelet clasps, the next challenge involved the bonding of custom magnets (1mm diameter by 1mm long) into 48 holes on four spools that form part of the company’s Word Play bead. This playful kinetic concept allows customers to index discs and create multiple four-letter words; ‘nice’ and ‘naughty’ versions of the  bead are available. The magnets ensure the alignment of each letter as it indexes.

“There was a brand-new type of magnet available that we wanted to start using, but it was proving problematic for our existing adhesive,” says Bailey. “I called Henkel into action, who duly proposed Loctite 290 penetrating adhesive and a suitable activator. We now have a belt-and-braces methodology from Henkel on how to achieve 100% activation.”

Bailey of Sheffield also involved Henkel in the development of a new product. The company’s Glow Beads (for use with its bracelets) contain a fluorescent glow stick (tritium isotope lamp) that requires potting and sealing within its housing. 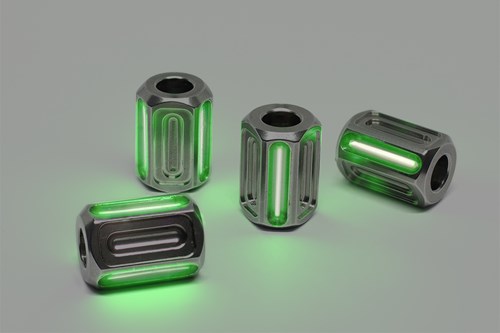 “Silicone is the traditional method deployed by leading watch manufacturers who use tritium, but I wanted to explore using an epoxy resin,” explains Mr Bailey. “I’d already done some tests with silicone and could tell it was never going to last as long as the lamp, thus presenting a mismatch in quality. We needed another solution, so I returned to Henkel.”

Henkel recommended Loctite 9483 epoxy potting adhesive. The product is optically clear and flows readily to allow easy application with no bubbles. Additionally, the hard-setting Loctite 9483 has a smooth glass finish that is scratch-resistant and provides good resistance to bathroom products.

Brand New Henkel Loctite Underfill Material is Top of the Class – Get It Now!