Huntingdon Fusion Techniques explains how to use gas purging techniques to protect welds.

The production of defect-free welds is crucial if high strength is mandatory. The presence of porosity in particular can lead to a significant reduction in mechanical properties. Joint failure inevitably leads at best to costly repair work but interruption of production can be even more expensive; the worst scenario is injury and loss of life.

Gases such as hydrogen, oxygen and nitrogen are soluble in many liquid metals (see Table 1, below). As the metal cools and eventually solidifies, the solubility decreases and the gas is then released causing porosity. To prevent porosity forming during fusion welding, it is essential that hydrogen, oxygen and nitrogen are excluded from the weld environment. This is best achieved by displacing these gases by flushing with an inert gas such as argon which is far less soluble in liquid metal than most other gases. The process is referred to as purging.

In circumstances where welds have to be designed to withstand stress in service, special consideration needs to be given to their metallurgy and profiles.

The mechanical properties of welds, particularly their fatigue properties, can be influenced significantly by their shape and composition. In particular, at the weld root, a positive reinforcement combined with smooth transition from weld to base metal is a prerequisite to achieve optimum mechanical strength.

Joints of high quality between cylindrical sections such as tubes and pipes can only be made by ensuring that atmospheric gases are eliminated, and positive, smooth weld reinforcement is provided.

The presence of oxygen and to a lesser extent nitrogen around the molten weld can lead to wide-ranging defects. Discoloration is unsightly and, in some instances, might indicate metallurgical imbalance, especially with many stainless steels. Gross oxidation inevitably results in a reduction of mechanical properties and can cause catastrophic loss of corrosion resistance. Nitrogen contamination can result in brittleness.  Gases in the weld may give rise to cracking during or after cooling.

It is clear that a reduction in weld section at the root, as evidenced by a concave geometry, will reduce the joint strength. Perhaps not so evident, but in many applications of crucial importance is the presence of notches or cracks, which tend to appear at the weld/base metal interface. These can propagate in service and cause failure.

Weld root quality when making tubular joints can be ensured by applying appropriate safeguards based on displacement of air from the fusion zone by inert gas. This is achieved by gas purging, and the general principles are shown in Fig 1.

The most commonly used purging gas in Europe is commercial quality argon; in the US, helium has been in more general use.

The materials being joined and the welding process used are two main factors in the selection of the optimum inert gas or gas mixture. Purge gas flow rate and pressure also need to be established, and once selected, they should be included in the formal welding procedure.

Variation in purge gas quality may arise during welding, and it may be desirable to apply continuous gas monitoring, especially to control oxygen and moisture content. For this purpose, dedicated weld purge monitors and dew point monitors are available commercially (from Huntingdon Fusion Techniques, for example).

The first requirement is to provide gas entry and exit points. Gas is fed through one end seal with an exit hole at the other end. Argon has a greater density than air and the gas inlet should be at a lower elevation than the exhaust end so that air is expelled effectively from the pipe bore. The converse applies to helium, which is less dense than air.

On small pipes and tubes, where the internal volume is small, the cost of continuous flow purging may not be significant. However, problems can arise due to turbulence inside the tube, making air displacement difficult.

The most effective purging systems are those which locate seals either side of the joint and displace air with an inert gas, at the same time monitoring potentially-damaging residual gases such as oxygen and hydrogen to ensure that they meet the requirements in the welding schedule. The presence of oxygen can lead to oxidation and loss of corrosion resistance. Hydrogen is a major cause of porosity in the weld metal.

It is also important that potential leak paths in the seals or delivery pipelines are eliminated.

Soluble barriers cut to pipe size and glued or taped to the internal diameter provide some degree of protection and the discs can be removed by flushing with water after use. The bond to the pipe can be prone to leakage, however, and the time and skill involved in preparation can be considerable.

These are suitable for low-volume weld production where time is not of the essence and access to joints is readily available. 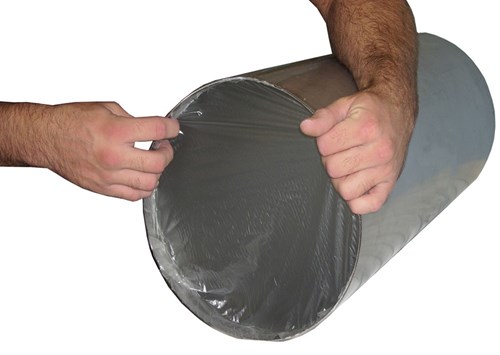 Paper and engineering plastic versions are available, but paper versions may not be suitable for site work because of their fragility. Time, dexterity and patience are required during application and the film can only be inserted as far away from the pipe access as an engineer can reach.

Expandable pipe plugs can be very effective and cheap. These are widely used for pipe pressure testing and volume production means that cost is low. 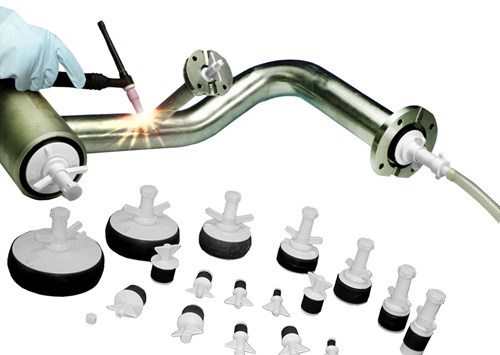 The sealing area is large and the time involved in preparation is relatively small. Plugs are available covering diameters up to 1000mm and whilst the smaller plugs are available with nylon bodies, aluminium and steel are used above 150mm (6 in). The larger and therefore heavier versions may thus be difficult to insert and remove if the joint line is more than 500mm (20 in) from the access point.

The only totally reliable purging systems are those based on inflatable seals. Contemporary equipment has been designed to provide fully integrated control of gas flow and purge pressure. Inert gas use is minimal and they are compatible with site use where multiple welds of the same diameter need to be made quickly and efficiently. 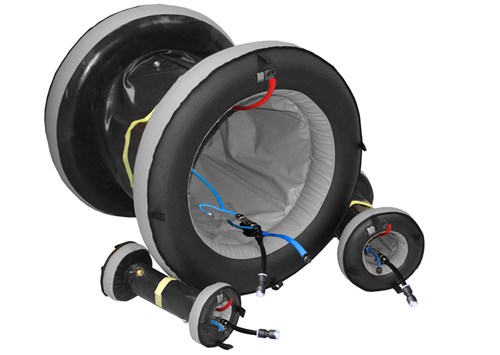 Equipment was introduced from 2004 to meet a growing global demand for fully integrated inflatable weld purge systems. Commercially available systems cover the range between 25 and 2400 mm (1 and 100 in) diameter and are designed for repeat use under site conditions.

Inflatable tandem products exploit the latest engineering developments in abrasion resistant fabrics and low-profile gas control valves. They are compatible with standards laid down by the nuclear industry.

More recent developments have led to the introduction of several further advances in equipment production. A control valve can prevent over-inflation even when the operator attempts to increase purge gas pressure. Pre-calibrated gas release valves replace alternative expensive valves that need pre-setting prior to each weld procedure.

Much larger pipe sizes can be purged effectively using inflatable dams. These can be placed either side of the joint or used as single units for welding flanges/fittings and inflated with inert gas or air. Once inflated, inert gas is passed into the space between the dams to flush out air. 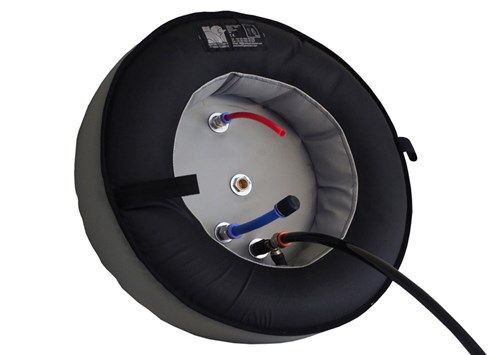 In order to ensure compliance with the required oxygen level within the weld purge zone it is desirable to measure the oxygen content continuously during the welding operation. Sensitive instruments have been developed specifically for weld purging applications. These purge monitors, of which a range to meet differing requirements is available, are robust devices capable of measuring oxygen levels as low as 10 ppm.

Dew point monitors have been designed to satisfy the requirement of the weld purge industry. Temperatures in the arc zone during welding are high enough to cause breakdown of water into its constituents. The free hydrogen liberated is known to give rise to porosity in the weld. Detection and removal of water vapour in the purge gas is therefore crucial if hydrogen porosity is to be avoided.